The strokes that all Chinese characters are composed of are to be written in a certain order which has originally been defined by Chinese calligraphy. Writing all characters according to the same rules assures that their intended shape and style are generally preserved even if written by different writers.
This dictionary shows you the correct stroke order as an animation for all characters so you can learn and understand how to write the character correctly. : 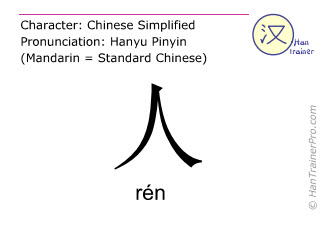 人 is composed of 2 strokes and therefore is of extremely low complexity compared to the other simplified Chinese characters (average: 13.1 strokes).

Report missing or erroneous translation of ren in English

Look up another word:

All content is protected under German and international copyright laws.
Version 5.37 / Last updated: 2022-10-05